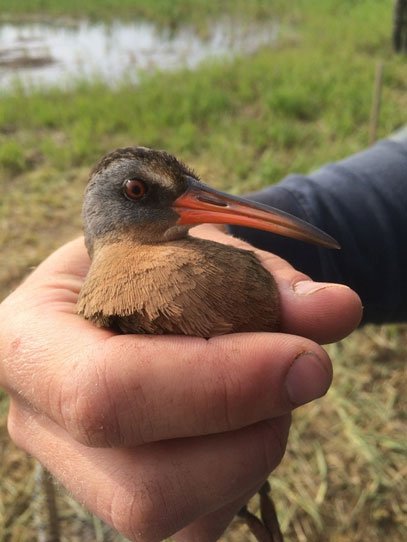 As the year winds down and we say goodbye to warm weather we can look back on the projects accomplished in 2016.

One such project was the launch of a multi-year rail banding study. Rails are common in the Montezuma Marshes, but they are secretive and infrequently encountered. The goal of the study is to uncover important information about their secret lives – to better understand, especially, the movement and habitat utilization of rails in the Northern Montezuma Wildlife Management Area marshes. Our objective during the first year was to build and run traps at established locations and then become familiar with the rails once in hand. Over the next 3 years we plan on attaching radio transmitters to several rails so we can monitor and record habitat use and the probability of detection.

The study area was concentrated within the Montezuma Wetlands Complex. Traps were set in seven different marshes where our traditional, play-back, marsh bird surveys were being conducted on separate evenings.

Our trap design and methods were audio, call-based funnel traps shared with us by John Simpson from the Winous Point Marsh Conservancy. From the second week in May through the third week in June the staff at Northern Montezuma ran 2 traps for 4 nights a week and banded a total of 76 Virginia (VIRA) and Sora (SORA) rails. Rails were captured at every site trapped (7 marshes). Overall, there were 4 marked VIRAs recaptured, and all in their original trap location.

We gained a little insight into the probability-of-detection question as our traditional Marsh Monitoring Program play-back surveys produced 4 VIRA and no SORA responses in two surveys during the time that traps were set out in Morgan Road-Unit 1. The number of rails captured in traps and banded in this same marsh in 15 trap-nights was more than 8 times higher (29 unique individual VIRAs and 3 SORAs) than what was detected during the Marsh Monitoring surveys.

We attempted to trap Common Gallinules with a trap that we modified by increasing the triangular funnel opening (sides were increased to 9”) and playing a Gallinule call from the Marsh Bird Monitoring Program. In 3 trap-nights, no Gallinules were captured.

The figures for the year

Banding methods included banding with a number 2 size aluminum USFWS leg band placed on the tibiotarsus/fibula area of the leg. Along with DNA analysis, other data collected included: weight using a Pesola scale, culmen length, and overall health of the bird. These data were then entered into the NY BANDIT Excel spreadsheet and submitted to the Bird Banding Lab in Patuxent.

Totals for Virginia Rails and Soras banded in 2016 at the Montezuma Wetlands Complex, including gender determinations by DNA analysis.