The DeRoo Youth Conservation Event celebrated its ninth year providing youngsters with the opportunity to actually partake in hunting experiences for pheasant, waterfowl, and whitetail deer. The entire event took place over a two weekend period starting with the conservation dinner at the Montezuma Audubon Center (MAC) on Friday September 30th.

The waterfowl hunt was October 1st with youth pheasant and deer action slated for October 8th.

Every youngster wishing to partake in any of the three hunts had to attend the mandatory dinner where safety, conservation, and hunter ethics were emphasized. They were accompanied by an adult mentor during the dinner and hunts.

During the Friday dinner the 37 youngsters and their mentors were treated to waterfowl calling and dog handling demonstrations, featuring Dino Amino, and some expert waterfowl calling from Lynch Mob Game Calls and Mossy Oak pro-staffer Jason Pollack. DEC Senior Wildlife technician Kent Kowalski talked about the importance of wildlife management and  Gene VanDeusen from the Wayne County Federation of Sportsmen’s Clubs told the youngsters that they will remember these hunts the rest of your life. Environmental Conservation Officers (ECO) Scott Angotti and Kevin Thomas discussed ‘Hunting Ethics’ and ‘The 10 Commandments of Firearm Safety. DEC Lt. Matt Lochner presented each youth hunter with appropriate hunting gear including a gun case, decoys, shooting sticks, hats, and vests, for their respective hunts The kids also received additional prizes from the Wayne County Federation including three DEC summer camp reservations and Fur- Fish and Game magazine subscriptions for three lucky hunters. Every youth present received a hat and Lochner told them to look at the cardboard inside the hat. “If your hat has LL written on it you have just received a lifetime hunting license. The lifetime hunting license was won by youth pheasant Benjamin Freeman. 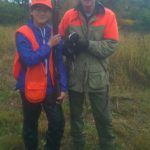 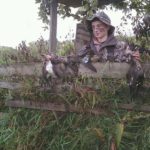 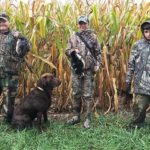 Pictures of Waterfowl and Pheasant Hunters

Early the next morning the waterfowlers met at the MAC and were divided into two groups to hunt DEC and Montezuma Refuge land. The weather was perfect for waterfowl hunting, wet and cool, and the youths with their guides bagged 36 ducks and 9 geese. The following Saturday it was the pheasant and deer hunters turn. The DeRoo youth hunts coincide with the special New York State Youth Hunting dates.

The five deer hunters were scattered in different locations while the 20 pheasant hunters roamed the fields at the MAC. Before the blaze-orange attired pheasant hunters started their hunt they shot rounds of trap under the guidance of ECO Scott Sincebaugh. Sincebaugh is a division firearms instructor. After powdering some clay pigeons, the young pheasant hunters were organized into groups of four and introduced to their dog handlers, who would be leading the youngsters through the fields surrounding MAC. The youth deer hunters hunted Saturday morning and afternoon and harvested four whitetails. 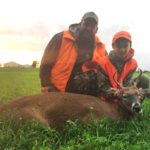 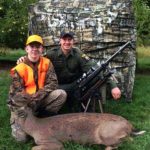 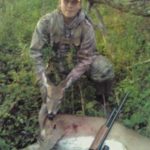 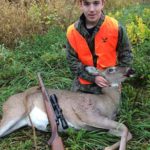 However impressive the number of harvests was for the three youth hunts, it was the combination of conservation, ethics, safety and appreciation for wildlife and habitat that have been the goals of the DeRoo event.

The DeRoo Conservation Event is sponsored by the following: