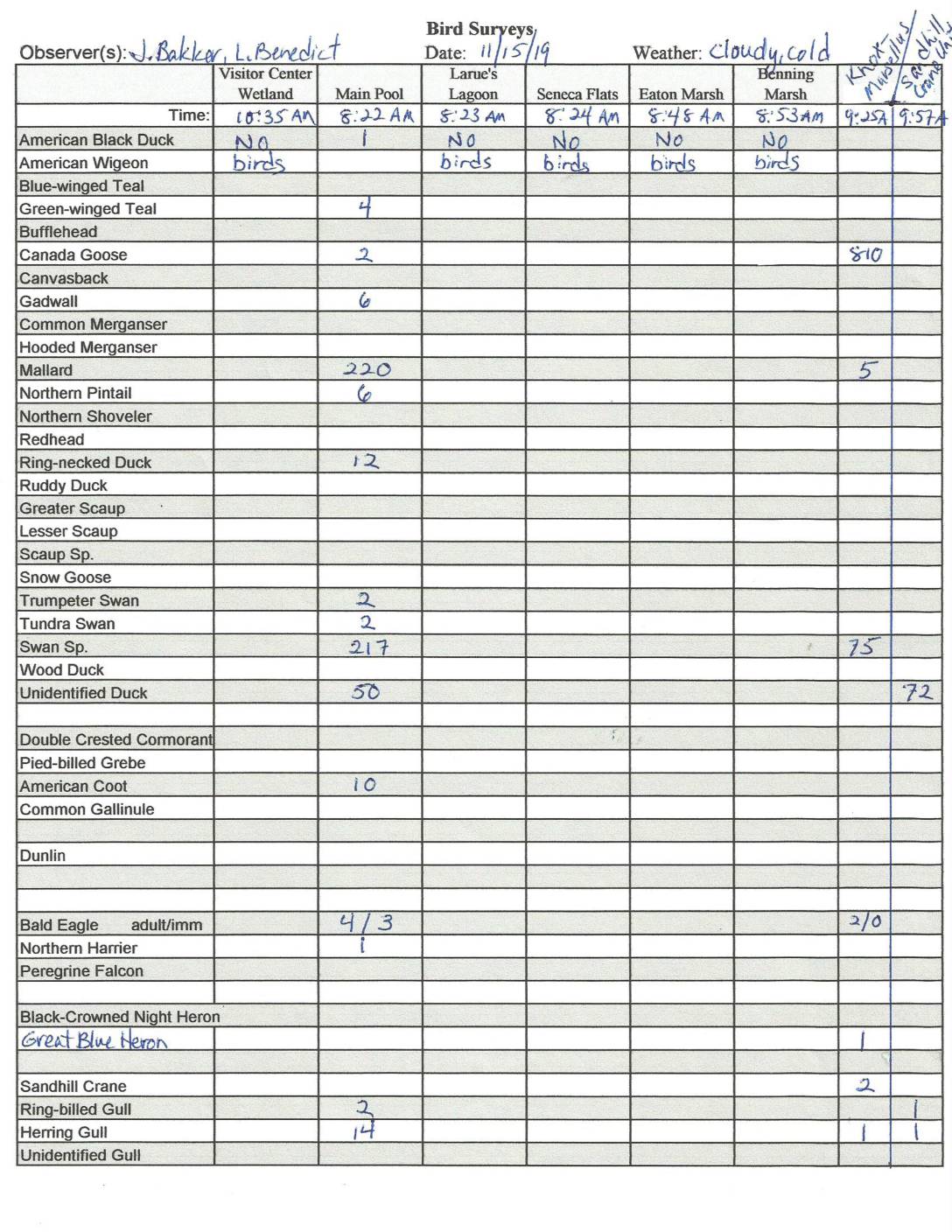 We surveyed this morning with calm air and temps in the high 30’s. Overall, pleasant conditions considering our recent blast of winter weather.

We encountered mostly ice on the impoundments, no surprise there. The smaller units around the Wildlife Drive were ice covered without birds. The Main Pool was mostly ice covered but had a couple hundred swans, a cluster of a couple hundred ducks a great distance from the Drive and a small group of gulls closer to the Drive. However, there were hundreds of Canada Geese and ducks on the Seneca-Cayuga Canal that could easily be seen from the Wildlife Drive.

Two adult Bald Eagles were on the Maple Island nest today. Last Monday I saw them together, high in the nest tree. There were two additional adult Bald Eagles on muskrat lodges toward the north end of the Main Pool who eventually flew northward and over I-90. Last Monday, Mike Tetlow shared with me that he thought he found a new Bald Eagle nest that could be seen from the area near the Eagle Sculpture by looking back to the east of May’s Point. We checked it out today and sure enough there is what appears to be the beginnings of an eagle nest in that area!! Of course we’ll keep an eye on it and next spring I’ll have to paddle out to see if it can be seen from the Seneca River. However, I would not turn down an invitation to a motor boat ride out there (hint, hint)!

We surveyed Knox-Marsellus from the East Road overlook. There were over 800 Canada Geese, a handful of Mallards and over 70 swans down on the ice. There was one Great Blue Heron in the little bit of open water in the northwest corner. I watched a pair of Sandhill Cranes fly in with a clumsy landing as they skidded and hopped along the ice trying to stay upright until they were able to stop. It was most awkward and quite comical. There were two adult Bald Eagles in a tree along the southern edge of the muck near the east edge of Puddler Marsh, most likely our 31 Muck South pair.

On our way to the Sandhill Crane Unit we discovered over 100 Sandhill Cranes in the fields and ditch on the north side of Armitage Rd/Route 89, east of East Road and West of Pure Functional Foods. They were still there when we came back through a little later.

Ice prevailed at the Crane Unit too. There was a small amount of open water further down Van Dyne Spoor Road but the only thing in it was a muskrat. It seems that all of our absolutely adorable Pied-billed Grebes have migrated, I don’t blame them. We could see almost 100 unidentified ducks out over the unit and a couple of gulls.

There were dozens of Common Mergansers in the Erie Canal near the lock on both sides of Route 89.

Be safe and enjoy your weekend.