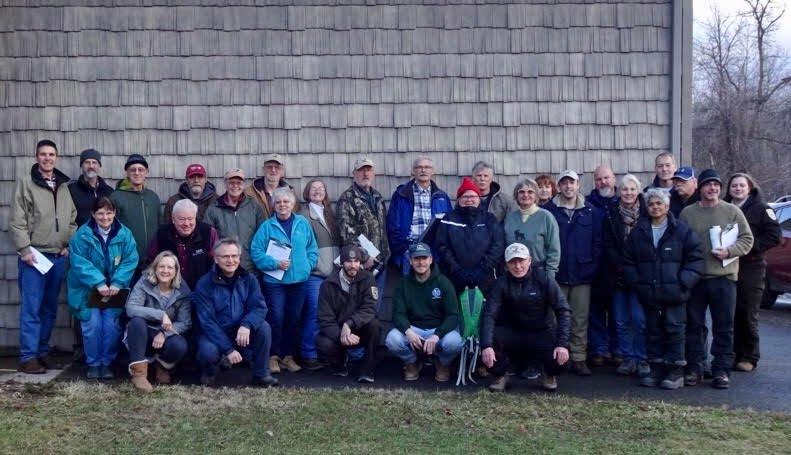 The Mid-Winter Bald Eagle Survey was conducted this morning by 32 surveyors over the same fourteen routes surveyed in prior years. A total 74 Bald Eagles (BAEA) were reported, a little below the record setting 81 Eagles sighted during last year’s survey. This survey was originally scheduled for January 11, however, it was postponed as the result of complications caused by the partial government shutdown.

It was a brisk day with some sunshine and temperatures in the mid thirties, However, the “real feel” was chilly in the lower twenties fueled by strong winds gusting to near 35 mph.  Ice cover on most of the ponds was in the 80 to 90% range, with less at the north end of Cayuga Lake. The Seneca River was in flood stage.

We began the survey wondering how the gusty winds would effect bird sightings and found out that some battled the winds in flight while others were seen sitting on the ice and in trees near their nests, The total 74 sightings included 31 adults (42%) and 38 juveniles (51%) with 5 of unknown age.This compares with a total 81 sightings which included 38 adults (47%) and 42 juveniles (52%) with 1 of unknown age in the 2018 survey. Every vehicle had at least two surveyors, providing many eyes to thoroughly cover the 14 routes.

The survey results will be forwarded to the U.S. Army Corps of Engineers who will compile it with data from surveys across the country. The attachments include a picture of most of the 32 surveyors, the BAEA Survey Summary comparing results from previous years, the BAEA sightings by route, and a list of route descriptions. It was so great to see everyone, especially since the termination of the Winter Raptor Surveys have eliminated our weekly gatherings. Montezuma is especially fortunate to have such a dedicated, enthusiastic and capable group of volunteer surveyors. Thanks to all who graciously provided a gourmet spread of potluck food for us to enjoy together, and to everyone for your support.